In ‘Four Hundred Souls,’ 90 Writers Tell Their Stories Of 4 Centuries Of African America 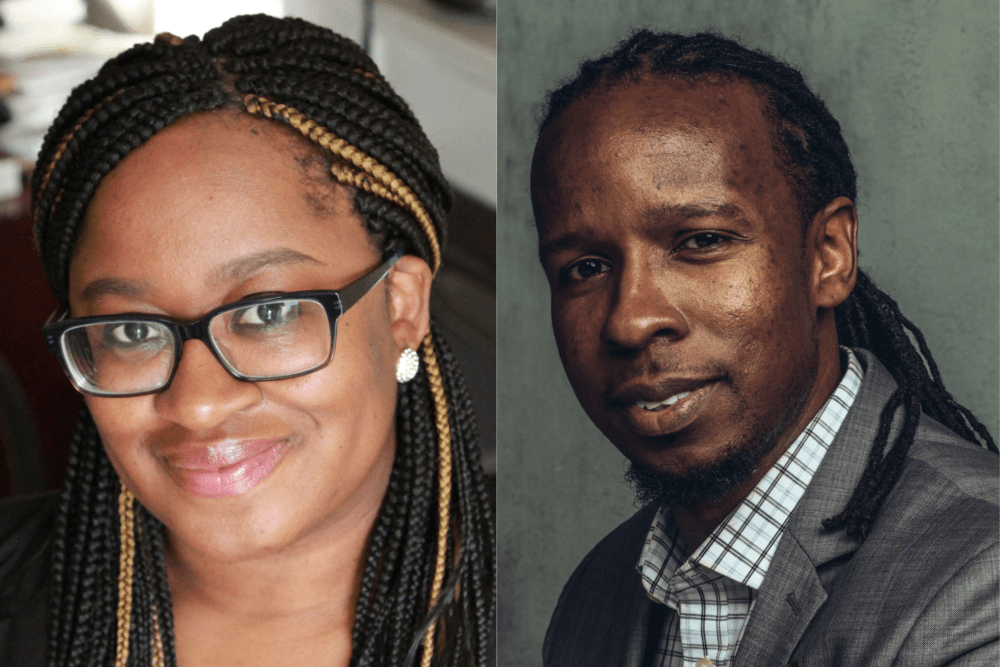 A new book takes a communal look at a history that has long been buried.

“Four Hundred Souls: A Community History of African America, 1619-2019” collects the work of 90 writers — historians, poets, journalists, novelists and activists — to tell the stories of Black Americans, from the arrival of the White Lion, which brought enslaved people to the colonies in 1619, to the Black Lives Matter movement.

Pulitzer Prize-winning New York Times journalist Nikole Hannah-Jones writes a chapter on the arrival of the White Lion, a harrowing tale which she calls “classically American.”

“The Adams and Eves of Black America did not arrive here in search of freedom or better life. They had been captured and stolen, forced onto a ship, shackled, writhing in filth as they suffered and starved,” she writes. “Some 40% of Angolans who boarded that ghastly vessel did not make it across the middle passage. They embarked not as people but as property.”

Scholars Ibram X. Kendi and Keisha N. Blain, who edited “Four Hundred Souls,” have been thinking about the 400th year anniversary of Black America for some time.

They wanted to capture centuries of stories and create a physical product that “could not only write history, but be history,” Kendi says.

The editors brought together a community of Black writers who could tell that history as they see it. Generations from now, readers will be able to dive into “Four Hundred Souls” and get a glimpse into the mindset of Black Americans on the 400th year mark, Kendi explains.

Each section of the book covers 40 years, beginning in 1619 and ending in 2019. Every writer covers a five-year period, and together, the pages make up what is the first single-volume history of Black Americans that we know of.

Many of the anecdotes on resilience and rebellion, specifically within the pages devoted to enslavement of Black people, may be new to readers. The bulk of the book focuses on the time period when Black people were enslaved, Kendi says, a history that many Americans are quick to move past. But more than anything, these stories showcase Black Americans’ humanity in their fight for freedom, Kendi says.

For Blain, compiling this collection was a “moving experience” that took both editors by surprise at times, she says.

“What’s amazing about history and certainly about Black history is that there are always new stories to uncover,” she says.

Writers unpacked a wide set of historical figures and moments as they grappled with how these past experiences shaped current-day America politically and socially. This historical throughline into the present was intentional, Blain says.

“Even when a writer does not explicitly talk about 2020 or 2019, it’s clear that they are thinking about how history shapes the present moment,” she says.

The traditional chapters of written text are divided into 10 parts, with each part bookended by a poem. Kendi calls the book’s group of writers a “community choir,” and since every choir needs soloists, the poets act as such, he says.

The poems capture the writing in each section and give readers a chance to reflect and digest the complexity within those words, he says.

For Kendi, collaborating with so many talented individuals on the project “reinforced the beauty and brilliance” of Black writers. Blain says “Four Hundred Souls” shows the “power of community,” especially during the COVID-19 pandemic.

The pandemic struck as the two were piecing the prose together. Blain’s life, like many others, was “turned upside down,” she says.

Knowing she was part of a history-making project was in many ways her “lifeline,” she recalls. It helped soothe the loneliness of staying at home as well as the deep pain and loss felt nationwide.

Reflecting on the published collection makes Blain think, “Wow, look what happens when you bring 90 brilliant Black writers together to tell that history,” she says. “It’s truly magical.”

In August 1619, when the twenty “Negroes” stepped off the ship White Lion and saw the British faces, they didn’t know.

Maybe they did remember the waters on the other side of the Atlantic Ocean surging into the Cuanza River that flowed into their West African homeland. Maybe they did not, too weary from the Middle Passage to picture Ndongo.

The West African nation of Angola derives its name from Angola, the royal title of Ndongo’s head of state. The twenty Ndongo people who arrived in Jamestown in August 1619 had likely been seized in a slave raid earlier that year in modern-day Angola and brought to the Portuguese port colony of Luanda unaware that they were pregnant with a new community.

In Luanda, they joined about 350 other captured Ndongo people, all now herded like chattel onto the São João Bautista. The Portuguese slave traders set sail for Spain’s plantation colony of Vera Cruz, Mexico. But they never arrived. The White Lion, an English privateer captained by John Jope, and another English privateer, the Treasurer, attacked in the glistening Caribbean waters. Not as abolitionists. As warriors against Europe’s declining superpower at the time: Spain.

The men-of-war kidnapped from the kidnappers a community of sixty or so enslaved people, probably the healthiest and youngest aboard. They divided the human bounty between the Treasurer and the White Lion and headed north to the British colonies.

The twenty or so Ndongo people went into labor as the White Lion sailed up the Atlantic. Historical forces were shaping this community—and the community was shaping historical forces. The community delivered—and was delivered—on Virginia’s shores on August 20, 1619, the symbolic birthdate of African America.

The Ndongo people were not the first people of African descent to land in the Americas. The first arrived before Christopher Columbus. Some people from Africa may have joined Spanish explorers on expeditions to the present-day United States during the sixteenth century. A revolt of enslaved Africans prevented Spanish slaveholders from establishing plantations in current-day South Carolina in 1526. “A muster roll for March 1619 shows that there were already thirty-two African slaves” in Virginia, historian Thomas C. Holt explained. But no one knows how or when they arrived. No one knows the precise birthdate of African America.

Black America can be defined as individuals of African descent in solidarity, whether involuntarily or voluntarily, whether politically or culturally, whether for survival or resistance.

Solidarity is the womb of community. The history of African America is the variegated story of this more-than-400-year-old diverse community. Ever since abolitionist James W. C. Pennington wrote The Origin and History of the Colored People, the inaugural history of Black America published in 1841, histories of Black America have almost always been written by a single individual, usually a man. But why not have a community of women and men chronicling the history of a community? Why not a Black choir singing the spiritual into the heavens of history? Four Hundred Souls: A Community History of African America, 1619–2019 is that community choir for this historic moment.

Award-winning historian and editor Keisha N. Blain and I assembled a community of eighty Black writers and ten Black poets who represent some of the best recorders of Black America at its four-hundred-year mark. The community is a remarkable sampling of historians, journalists, activists, philosophers, novelists, political analysts, lawyers, anthropologists, curators, theologians, sociologists, essayists, economists, educators, poets, and cultural critics. The writing community includes Black people who identify (or are identified) as women and men, cisgender and transgender, younger and older, straight and queer, dark-skinned and light-skinned. The writers are immigrants or descendants of immigrants from Africa and the African diaspora. The writers are descendants of enslaved people in the United States.

Most of the pieces in this volume were written in 2019. We wanted the community to be writing during the four-hundredth year. We wanted Four Hundred Souls to write history and be history. Readers of this communal diary will forever know what Black Americans were thinking about the past and present when African America symbolically turned four hundred years old.

Each of the eighty writers here chronicles a five-year span of Black America’s history to cover the four hundred years. The volume’s first writer, the Pulitzer Prize–winning creator of The 1619 Project, journalist Nikole Hannah-Jones, covers from August 20, 1619, to August 19, 1624. The volume’s final writer, Black Lives Matter cofounder Alicia Garza, covers from August 20, 2014, to August 20, 2019. Each piece has been written distinctively while being relatively equal in length to the others, making for a cohesive and connected narrative with strikingly different—yet unified—voices. A choir.

And collectively this choir sings the chords of survival, of struggle, of success, of death, of life, of joy, of racism, of antiracism, of creation, of destruction—of America’s clearest chords, year after year, of liberty, justice, and democracy for all. Four hundred chords.

Each piece revolves around a person, place, thing, idea, or event. This cabinet of curiosities of eighty different topics from eighty different minds, reflecting eighty different perspectives, is essential to understanding this community of difference that has always defined Black America.

Four Hundred Souls is further divided into ten parts, each covering forty years. Each part concludes with a poem that recaptures its span of history in verse. These ten poets are like lyrical soloists for the choir, singing historical interludes. Sometimes history is best captured by poets—as these ten poets show. Indeed, the first verses sprang from those original twenty Ndongo people.

Virginia’s recorder general John Rolfe, known as Pocahontas’s husband, produced Black America’s birth certificate in 1619. He notified Sir Edwin Sandys, treasurer of the Virginia Company of London, that “a Dutch man of Warr . . . brought not any thing but 20 and odd Negroes” and traded them for food.

we shall overcome someday.

Individuals of African descent came to know that they would not become free until Black America became free. Individuals bonded into community to overcome.

There may be no better word to encapsulate Black American history than community. For better or worse, ever since the twenty Ndongo people arrived, individuals of African descent have, for the most part, been made into a community, functioned as a community, departed the community, lived through so much as a community.

I don’t know how the community has survived—and at times thrived—as much as it has been deprived for four hundred years. The history of Black America has been almost spiritual. Striving to survive the death that is racism. Living through death like spirits. Forging a soulful history. A history full of souls. A soul for each year of history.

Emiko Tamagawa produced and edited this interview for broadcast with Jill Ryan. Serena McMahon adapted it for the web.