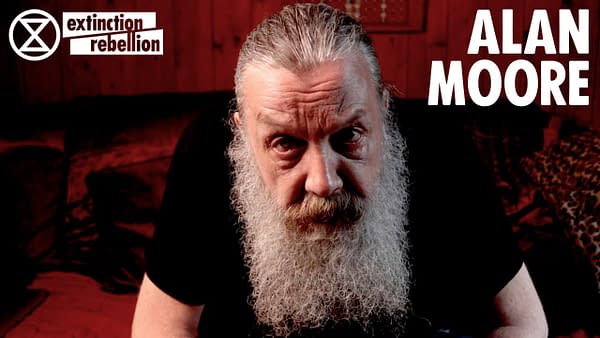 British booktrade magazine The Bookseller interviewed James Willis, the managing director of literary agent Watson, Little last week in a story that did not get picked up by a wider press, but will do so probably the minute I press Publish. Because it transpires that Alan Moore now has a literary agent. And it is Watson, Little.

As they state “Moore has never had an agent, and given his famous public disagreements with filmmakers on how they have adapted his stories, perhaps he should have.”

Alan Moore has published novels and novellas before now, notably his first novel Voice Of The Fire and his second two-thirds-of-a-million-word-long novel, Jerusalem, set in his home to of Northampton, across the millennia. But it seems he has another location in mind for his next work, “a collection of short stories and Long London, a series of speculative novels—which at this writing Wills is auctioning in the UK.”

Alan Moore has written about London before, notably his performance art piece, Highbury Working, set in around the Highbury area of London. I can’t help but notice that his new agent, Watson Little, is located on Highbury Grove, in Highbury East. I can cycle there…

We look forward to discovering how the bidding goes on that. But it appears that it is a family connection, James Wills has been the literary agent for his daughter, Leah Moore, for years, but that previously Alan had said he didn’t believe in agents.

But for these stories and the Long London series of novels, getting an auction together, it seems that it might be the best way.

Founded in 1971, Watson, Little is a long-established literary agency that “offers a full service to its clients across all aspects of media. It has an outstanding track record, and has represented a number of celebrated, bestselling and prize-winning authors over the years. Its current authors feature some of the world’s leading and most exciting novelists, children’s writers, historians, illustrators, and specialist writers, each of whom are at the top of their respective fields of expertise.”

And now Alan Moore as well!

Founder of Bleeding Cool. The longest-serving digital news reporter in the world, since 1992. Author of The Flying Friar, Holed Up, The Avengefuls, Doctor Who: Room With A Deja Vu, The Many Murders Of Miss Cranbourne, Chase Variant. Lives in South-West London, works from Blacks on Dean Street, shops at Piranha Comics. Father of two. Political cartoonist.